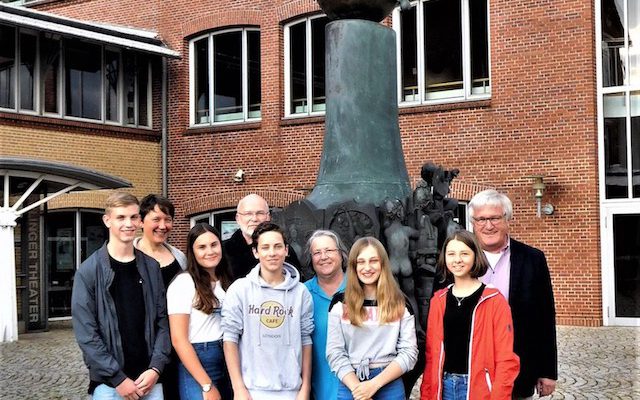 For the third time after 2015 and 2017, Climate Scouts from Gymnasium Sulingen travel to Swakopmund/ Namibia for a climate workshop. Although at first glance Swakopmund is reminiscent of a European city, many things are different. Swakopmund is situated in the southern hemisphere – where winter is now prevailing – and on the edge of the oldest desert in the world, the Namib. The annual precipitation is approximately 20 mm.

The Sulingen students Lale Cattau, Lana Sander, Jana Gromut, Georg Beverborg and Lasse Reimers would like to exchange ideas with the Climate Scouts of the Namib High School in Swakopmund about climate change, climate protection, environmental pollution and environmental protection. The programme also includes a city tour to get to know Swakopmund’s German past and a tour of Mondesa, the city’s former township. An excursion to the national maritime aquarium of Namibia informs about the importance and endangerment of the oceans with a special focus on Benguela Current, South Atlantic, Namibian coastal waters, life in the South Atlantic, pollution/plastic waste. Furthermore, a boat tour through the lagoon of Walvis Bay and of course a trip into the desert are planned.

Together with the Namibian Climate Scouts, the Sulinger students will take part in regular lessons. In addition, the different climatic conditions in Namibia and Germany and the effects of climate change will be discussed in workshops. The summary of the results up to now and the planning of future projects are also on the agenda.

The initiator of the North-South partnership is Arthur Rohlfing, chairman of the “Sonnenkinderprojekt Namibia e.V.”, which has been supporting girls and boys at schools in Namibia for many years. The aim of the Sonnenkinderprojekt is the intensive exchange of knowledge and the imparting of action competences in nature conservation and environmental protection. As decision-makers and consumers of tomorrow, children and young people have the most important role to play.

Between the exchange trips the students of both schools are in contact via social media and e-mail and work on similar topics and projects at their schools. But all participants agree that regular face-to-face meetings revive the Climate Scout Project and the working groups at both schools and ultimately keep them running.

The trip is financed by the Bingo Environmental Foundation and the Sonnenkinderprojekt. As the Bingo Foundation’s support for the project comes to an end this year, Arthur Rohlfing and his colleagues from the Sonnenkinderprojekt are looking for new sponsors to ensure that the North-South partnership will continue in future years. Plans for a return visit by the Namibian Climate Scouts in 2020 are already underway.

If you want to like follow the “adventures” of the Climate Scouts, you can do that by means of the  Namibia Blogs on the homepage of the High School Sulingen: www.gymnasium-sulingen.de

Hello and welcome to the Sonnenkinderprojekt

Please select the Tab Content in the Widget Settings.

Please select the Tab Content in the Widget Settings.